I’ve been a Granite Stater for a few decades now, but I grew up in Florida. “Snow” to a Floridian is all alike, just cold white stuff that falls from the sky, ideally several states away. My first few New Hampshire winters were a revelation: powder, heavy slush, the dreaded “icy mix,” thawed-and-refrozen, and so on. I’ve learned to appreciate the variations that give each winter day its own personality.

Even for a onetime Florida girl, winter has its moments. A sunny day on packed powder, for example, is as wonderful for a walker as for any skier. A recent Saturday on the Nashua River Rail Trail was as good as it gets.

Snow on several bitterly-cold days had piled up powder along the trail. No motorized vehicles are allowed on the NRRT, and there’s no snow grooming, so users had to make their own paths. By the time I got to the trail, a few informal lanes had already formed. Cross-country ski tracks were evident, as was a packed-down lane suitable for walkers wearing snowshoes or cleats. There was plenty of untracked snow for snowshoers wanting to get a workout. Best of all, while the trail had obviously seen traffic before I arrived, hardly anyone was out there during my walk.

I’ve been on NRRT in every season. It’s shaded in the summer, colorful in the fall, and adorned with a succession of flowers from mud season until hard frost. It’s popular on summer weekends, when segments of it are as crowded as a carnival midway. Winter is its quiet time.

I drank in the quiet the other day. The prop plane from the nearby skydiving school was in its hangar; no one was mowing a lawn; the crowds were home awaiting warmer days. Snow covered the pavement, muted every sound, and concealed the ground where bluets and columbines will bloom a few months from now. I spent two hours on the trail and wished I could have spent two more.

Since that visit, I’ve seen winter’s messier side. The snow’s now crusted with ice. A few thaw-refreeze cycles in the coming days will leave roads looking much better than trails to me. That’s fine – but when the powder falls again, I’ll be ditching work for a few hours.

From Ashburnham, Massachusetts to Greenfield, New Hampshire, the Wapack range extends over a series of peaks that can be seen clearly from the eastern slopes of Mount Monadnock. The 21-mile Wapack Trail spans the range, with segments that make for great dayhikes.

My copy of the the Wapack Trail guide is well-thumbed, and the map that comes with it has held up pretty well for me through the years. Map and guidebook, along with recent trail notes, are available at the Friends of the Wapack web site.

Pack Monadnock is the most popular part of the trail, with Miller State Park and the summit’s fire tower apt to draw crowds. North Pack is close enough to add for an out-and-back hike.

Other segments I’ve enjoyed: I like the ridge of Temple Mountain in July, when I can make a lunch out of blueberries. Barrett Mountain is a winter destination for me when I go snowshoeing at Windblown in New Ipswich. Watatic, at the southern end of the trail, has a wonderful open summit. The variety of birds in the Binney Pond area make the mosquitoes worth tolerating.

Endurance racers have been known to run the entire trail in a day. To each her or his own. I take the Wapack in segments, at a gentle pace. Either way, the Wapack Range is memorable.

Southern section of the trail

P is for Portland, Maine: northern terminus of what used to be a Boston and Maine rail line, 110 miles from this granite marker along the Nashua River Rail Trail in Massachusetts. The other side of the marker says W37, meaning 37 miles to Worcester. This is one of several markers remaining from the days of the active line.

It’s a fifty-degree February day, with open water alongside the trail. The three-mile stretch of trail I had to myself this weekend is a patchwork of clear pavement and slush and half-melted ice. I came upon a couple of skinny little blown-down trees that were easy to move off the trail. We have yet to see the season’s first serious sustained winds that will surely bring down a big pine or two.

This was a nearly-silent walk, perfect for a Sunday morning after Mass. There’s no hum from the Skydive Pepperell plane in the winter. The noisy geese that usually populate the swamps and ponds along the way were absent. No kids trying out their training wheels, no runners passing me, no backyard barbecues at nearby houses. There will be plenty of time for all that later in the year. For today, solitude suited me.

I shouldn’t have worried about not seeing columbines on my last walk along the Nashua River Rail Trail. I just hadn’t waited long enough. They were out this morning. So were ladyslippers, which I have never noticed along this trail. I spent a few minutes today on the short stretch of trail in Dunstable between the Massachusetts/New Hampshire state line and the first River Road crossing. I also took a side trail to look at the Nashua River, which is lazy and still today. My photo of the river shows only a sharp reflection of the trees along the banks. No apparent flow; just a mirror.

As quiet as it gets.

I didn’t have much company on this early-morning walk. I saw two bicyclists when I was nearly back to my car. I thought they were chatting with each other, until they got close enough so I could see they were each talking on a phone. Really, guys? But I shouldn’t judge. I carry my phone all the time, too. Those bicyclists missed some good flowers as they rolled past, deep in their respective conversations.

I also spent time on Beaver Brook land in Hollis today, north of Route 130. More ladyslippers – lots of them! They’ll be gone very soon, as the mountain laurel gets set to bloom. (And that’s a lovely sight.) I hiked around the wildlife pond with three other people who know the area well.

We stopped at the bridge that crosses the center of the pond, with a beaver dam nearby. One of my companions told us about bringing her five-year-old son to this spot. She told him beavers lived nearby. Being five and literal, the boy called out, “Mr. Beaver, you come out!” Just as Mom was explaining that beavers couldn’t answer him, a beaver surfaced, slapped the water with its tail, and swam away. Score one for the five-year-old. 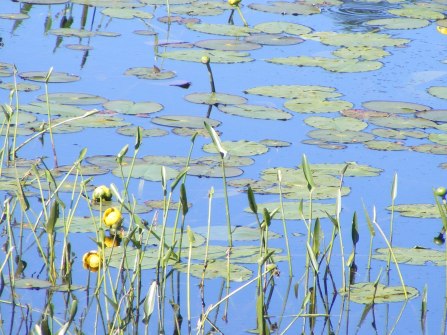 What are you seeing this week?

I don’t dare think that we’re done with winter yet, but today’s 50-degree temps are very encouraging. I headed to Gilson Road in Nashua to see how the rail trail is faring, and I ended up getting all the way to Rt. 113 in Pepperell before heading back home.

We can’t declare ice-out just yet. About half the trail has snow cover. In the early afternoon of a sunny & warm day like this one, the snow is soft & crunchy, not too deep, not requiring boots. Travel was much easier for me than for the many bicyclists who were out today, but even they seemed to be having a good time. It was an outdoor kind of day. My guess is that early mornings after sub-freezing nights would NOT be a good time to visit this trail, but once the sun gets up there & softens the surface, no problem. This should be a warm week, so a lot of the snow may be gone by next weekend.

Damage from the windstorm 10 days ago seems to be under control. I saw several places where volunteers had cut up & moved aside branches that had fallen onto the pavement. Snow-free sections of trail are covered with pine cones shaken loose by the wind.

The city of Nashua still has the Gilson Road parking lot chained off for the season, so I parked on the roadside. Many more cars were parked on 111-A.

I had hoped to find the Rail Trail Ice Cream Shop open in East Pepperell, but from across 113, I didn’t see the “open” flag flying. Oh, well, another month will take care of that.

Just two weeks ago, I snowshoed in the New Ipswich woods in winter’s loveliest powder, and today I’m wearing sneakers for an 8-mile walk. Great days, either way.