“Show me some spring pictures,” a reader recently asked me. He was looking for budding trees and fresh green growth. Perhaps I can oblige him in another week or so. For now, the signs of spring are subtler.

It’s mud season, but the trails at Horse Hill Nature Preserve in Merrimack were in remarkably good shape the other day. The herons were back on Lastowka Pond, croaking and courting. I could see that the beavers had been busy along the shoreline, taking down a big tree that barely missed a bench as it fell. Deeper into the woods, I smelled freshly-cut lumber on a refurbished bog bridge.

On a recent walk through Mine Falls Park in Nashua, I looked for swans in the cove but found none. Some years, there’s a pair that bullies the park’s Canada geese into the cove’s farther reaches. The geese are safe for now. I was glad to see blackbirds amid the reeds that edge the cove; I missed them in winter.

Business took me to Loudon recently, and I added a couple of hours to the trip so I could visit nearby Belmont and discover the Winni Trail, a paved rail trail along Lake Winnisquam. That was one of my better detours.

I had the advantage of a fine sunny day, with cool air and miles of visibility. A stretch of trail went through the woods, with lake and rail line out of sight, and then broke into the open to hug the shore alongside the rails. Good thing someone thought to set up a few benches along the way; the views are definitely worth stopping for.

It was my first experience with rail-with-trail, where a trail shares the right-of-way with an active rail line. That particular line is owned by the state of New Hampshire, not by a rail corporation, and I suppose that might have simplified development of the trail.

The shared right-of-way continues into Laconia on the WOW Trail (for Lakes Winnisquam, Opechee, and Winnipesaukee). Someday, with a lot of cooperation and investment and volunteer work, there could be a continuous recreational rail trail linking WOW in Laconia with the Winnipesaukee River Trail in Tilton via the Winni Trail in Belmont. That’s a project to cheer for, if Belmont’s trail is indicative of what’s ahead.

While a couple of my local recreational areas have been closed due to the too-much-love phenomenon (complicated by the no-sense-of-stewardship phenomenon), I am still getting out for good walks. August started out hot and hazy. It’s going out with hints of fall: fresh breezes, low humidity.

On the one and only hilly hike I tried recently, Pack Monadnock via the Marion Davis Trail, I slipped on a bit of wet ledge and fell on my best-padded feature. I’ll have the bruise for another couple of weeks. It was worth it, just to be back on Pack. Even on a hazy day with a noisy storm approaching – which is what had me zipping downhill too quickly – Pack Monadnock makes for a nice hike.

Pack Monadnock is in Miller State Park, one of the New Hampshire state parks that is operating under an advance reservation system for parking permits. Yes, COVID restrictions are still with us. I’ve used the reservation system at a few parks since last spring, and after some initial annoyance, I’m OK with it. It rules out spur-of-the-moment trips to certain parks, but there are always other trails to consider.

Closer to home, my favorite nature preserve in town has been a soothing refuge all summer. I recently discovered a little overlook that I somehow hadn’t known about, complete with bench, in a quiet part of the preserve. What does it overlook? A bone-dry stream-bed, that’s what. We’re in a drought. Birches in the preserve have shown their stress by dropping leaves early. The larger ponds and marshes in the preserve are at low water levels, but they’re still full of life.

I took my own advice and sought out a less-used trailhead at Beaver Brook, where the Jeff Smith Trail meets NH Route 130 in Hollis. I was rewarded with a couple of hours of near-solitude on surprisingly varied trails.

The mixed hardwoods were no surprise. I loved coming across a meadow with an old cellar hole and a stone wall nearby, dead giveaways that there had once been a farm there. My favorite trail turned out to be one that I hadn’t known about before, through a patch of woods dominated by white pines. Pine needles cushioned my every step.

The breeze in the trees there reminded me of growing up in south Florida, where fifty years ago long-needled Australian pines dominated every local park. Those trees were non-native and invasive, but I didn’t know it at the time; they were just normal trees to me. The memory of the sound of the wind through those long needles has stayed with me. The pines in New Hampshire with their shorter needles play a slightly different tune, just as soothing.

Queen Anne’s lace and goldenrod tried to get my attention, but a tiny pink wildflower beat them both. I don’t know what it’s called. Perhaps it’s something common, but it was new to me: a gift from August.

This has been a muted fall in New Hampshire, which is not to say a bad one. There are brilliant trees here and there, but for the most part, this month has been dominated by gold and bronze. Here’s my October sampler, featuring Oak Hill, Horse Hill Preserve, Ponemah Bog, Craney Hill, and Crotched Mountain.

It had been seven years since my last walk to the fire tower on Oak Hill. Finally, I got back there. I had been warned about wasps near the cab, but the first frosts must have  nipped them. 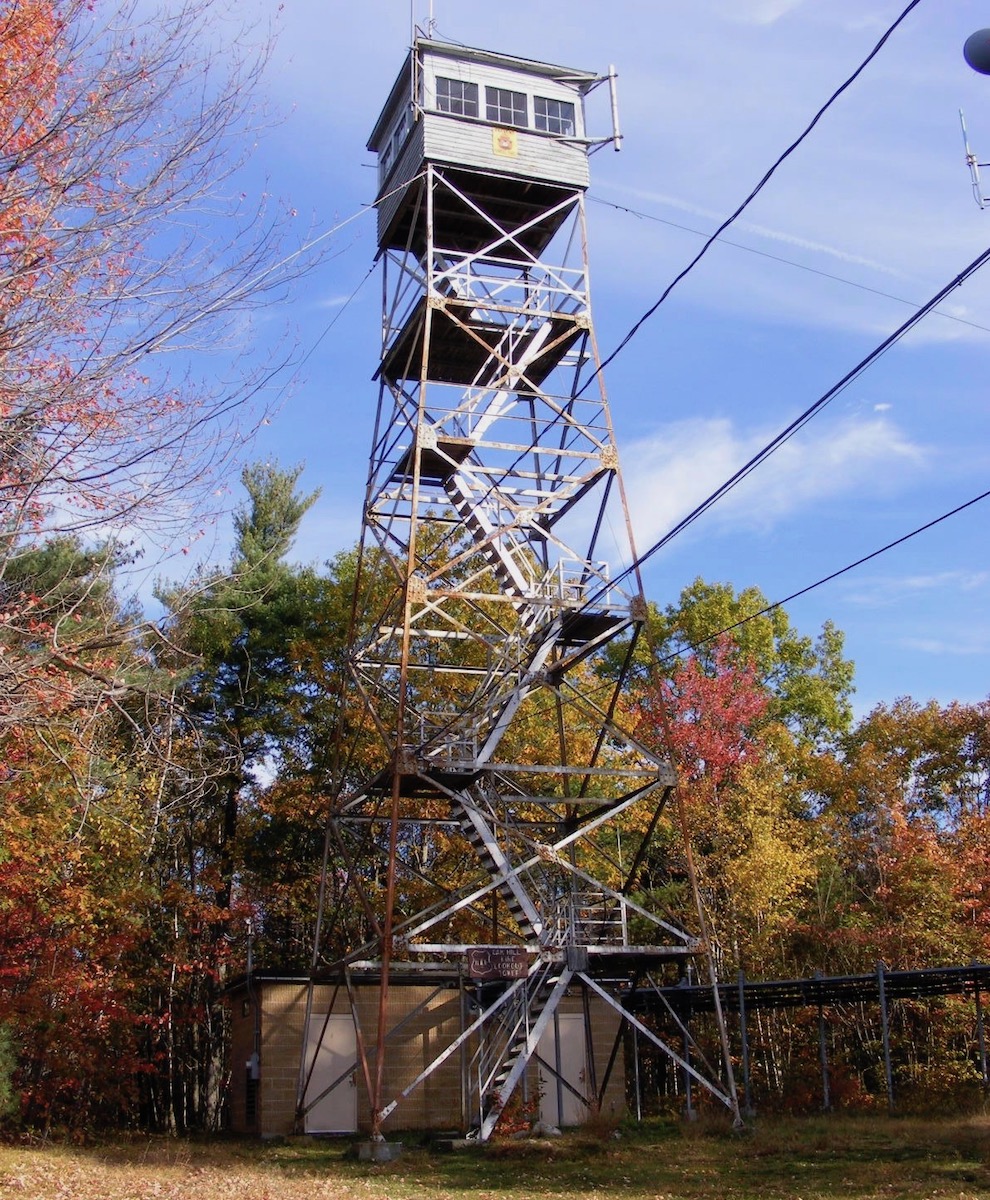 View to west from Oak Hill. The plume of steam is from a plant near the Concord-Boscawen town line. 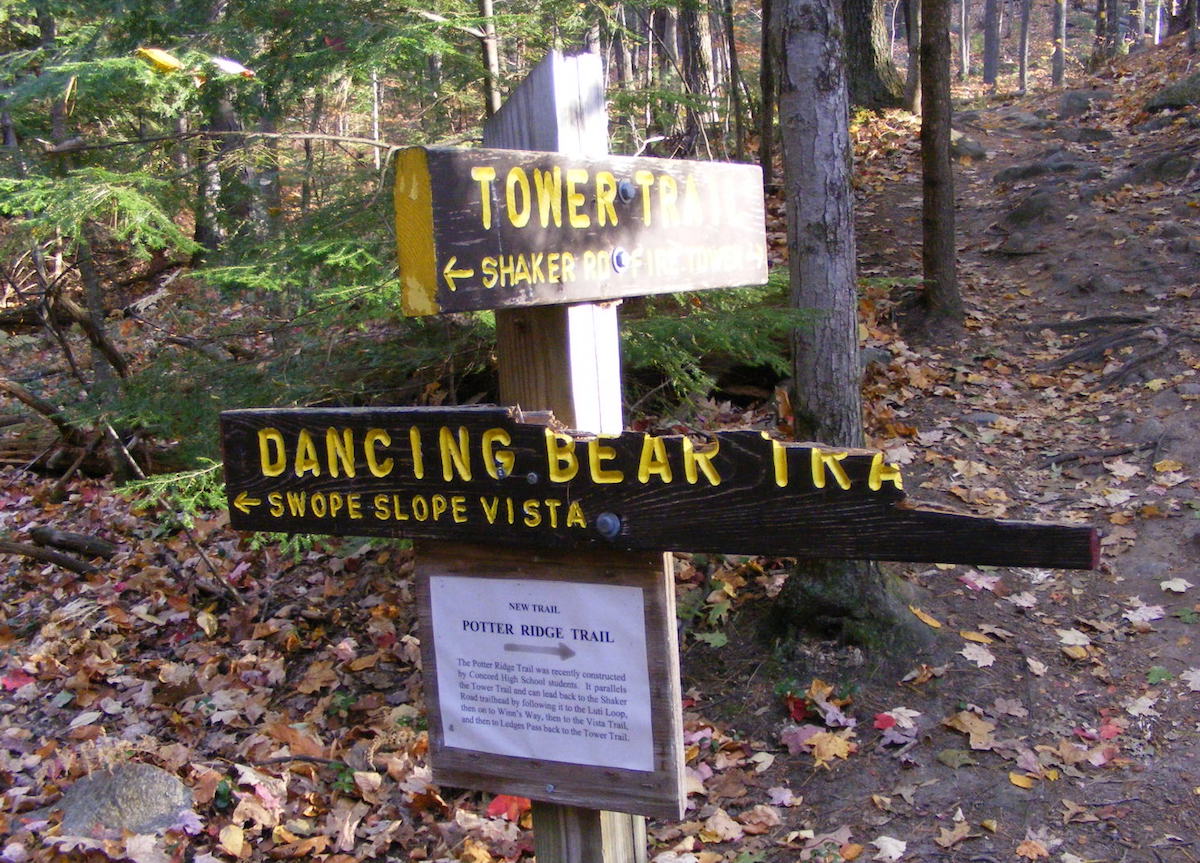 The best color this fall has been in the wetlands, not the hills. A walk to the center of the Horse Hill preserve rewarded me with much brighter foliage than I’d seen just a couple of days earlier on a drive toward the Monadnocks. 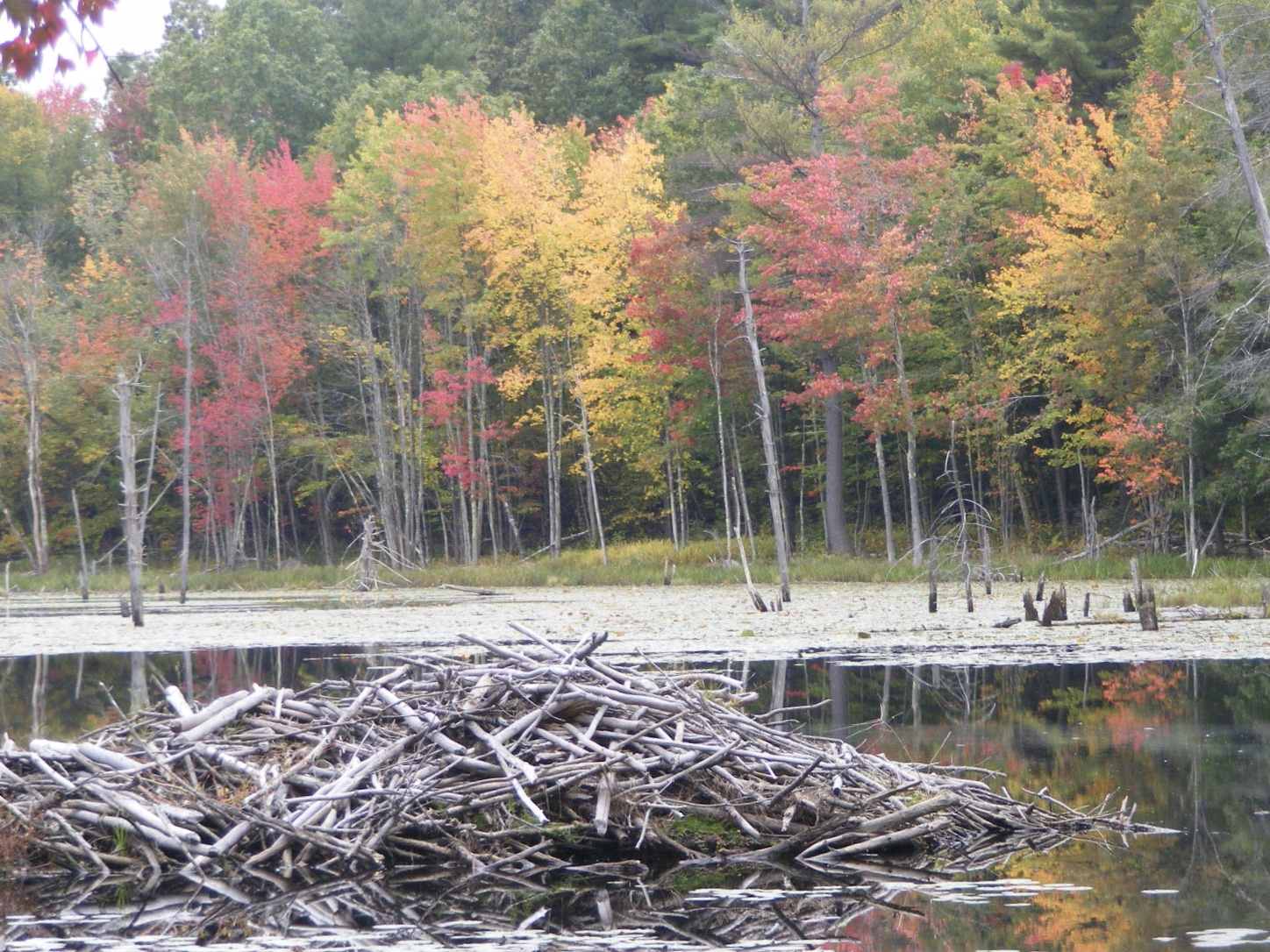 I’m amazed that the beavers haven’t abandoned this lodge so close to a Horse Hill trail. I guess we hikers haven’t been disruptive.

Leaf-peeping in one of my favorite spots in Horse Hill Preserve.

The shrubs and water plants in the bog were showier than the trees.

The NH Fire Towers page on Facebook clued me in to the Craney Hill lookout tower, once a fire tower. Now, it’s open to the public two weekends a year, during foliage season. I made it to the tower just in time – last visitor on the last day!

I didn’t stop with the Gregg Trail this time. Two friends joined me for a walk to the ridgetop via Shannon’s Trail. I owe thanks to the folks who managed to get a picnic table up there.

The view from the picnic table atop Crotched Mountain: a hint of color, and distant Monadnock. And oh, that sky.

My winter walks so far have almost all been on pavement, even though we’ve had plenty of snowfall. It was time to find a local trail and maybe give the snowshoes a workout. I headed for Horse Hill close to home.

It had been a few days since the last snowfall, so the Loop Trail was packed down. No snowshoes needed, although spikes were handy. The weather’s brought some thaw/refreeze cycles, leaving icy spots here and there. (I’m using a new set of StabilicersLite that I picked up at my local L.L. Bean outlet, having finally worn out my old YakTrax.)

A quiet walk in the woods was perfect at the end of a day spent in front of a laptop screen. Pavement wouldn’t have been nearly as refreshing. 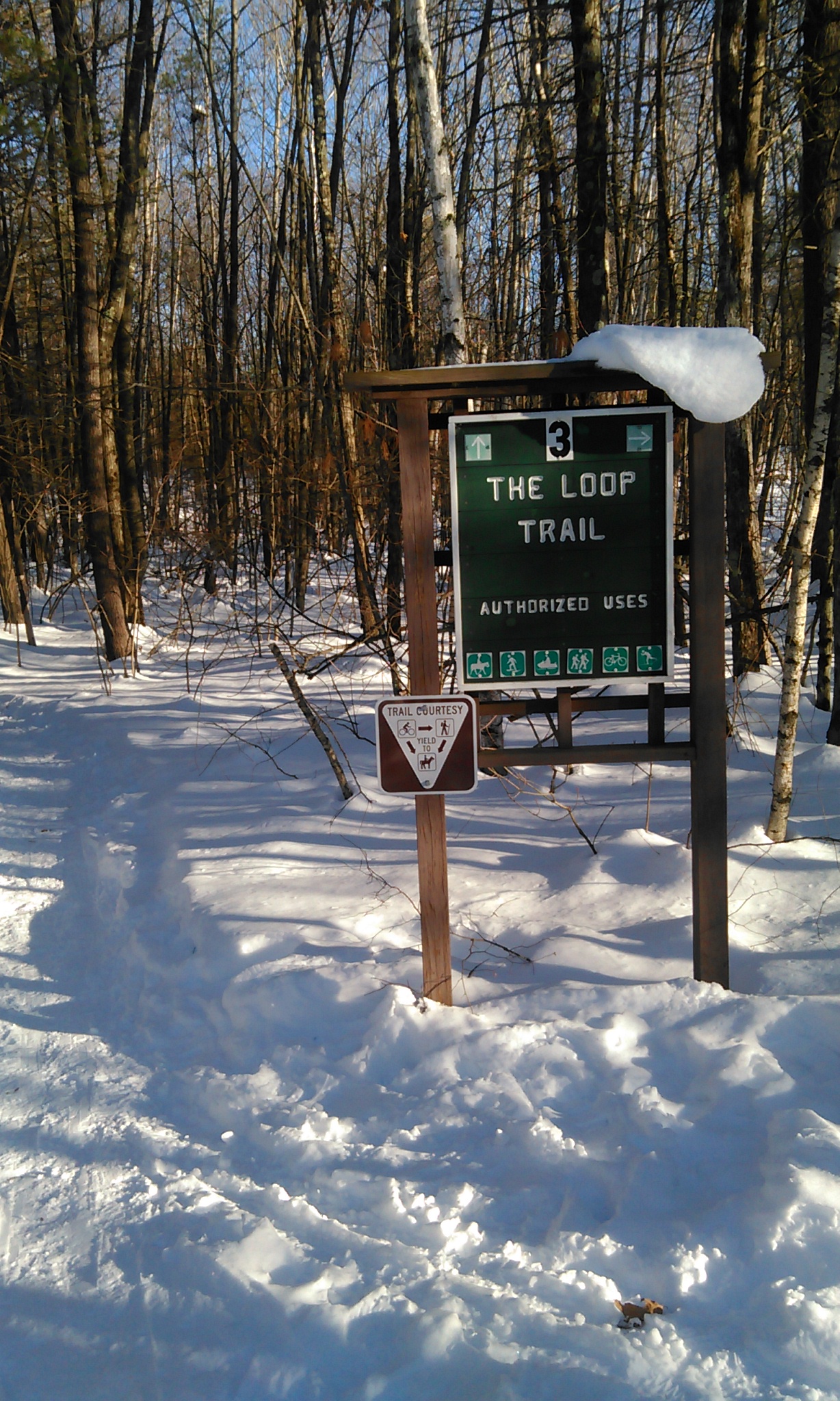 A tree looked freshly girdled, probably by one of the beavers from the nearby pond. The tree beside it bore a few fresh marks, as though a beaver had sampled it and thought “nah…I like the other one better.”

Among the places to which I’ve returned again and again during this blog’s ten years is Horse Hill Nature Preserve, one of my favorite places in town. 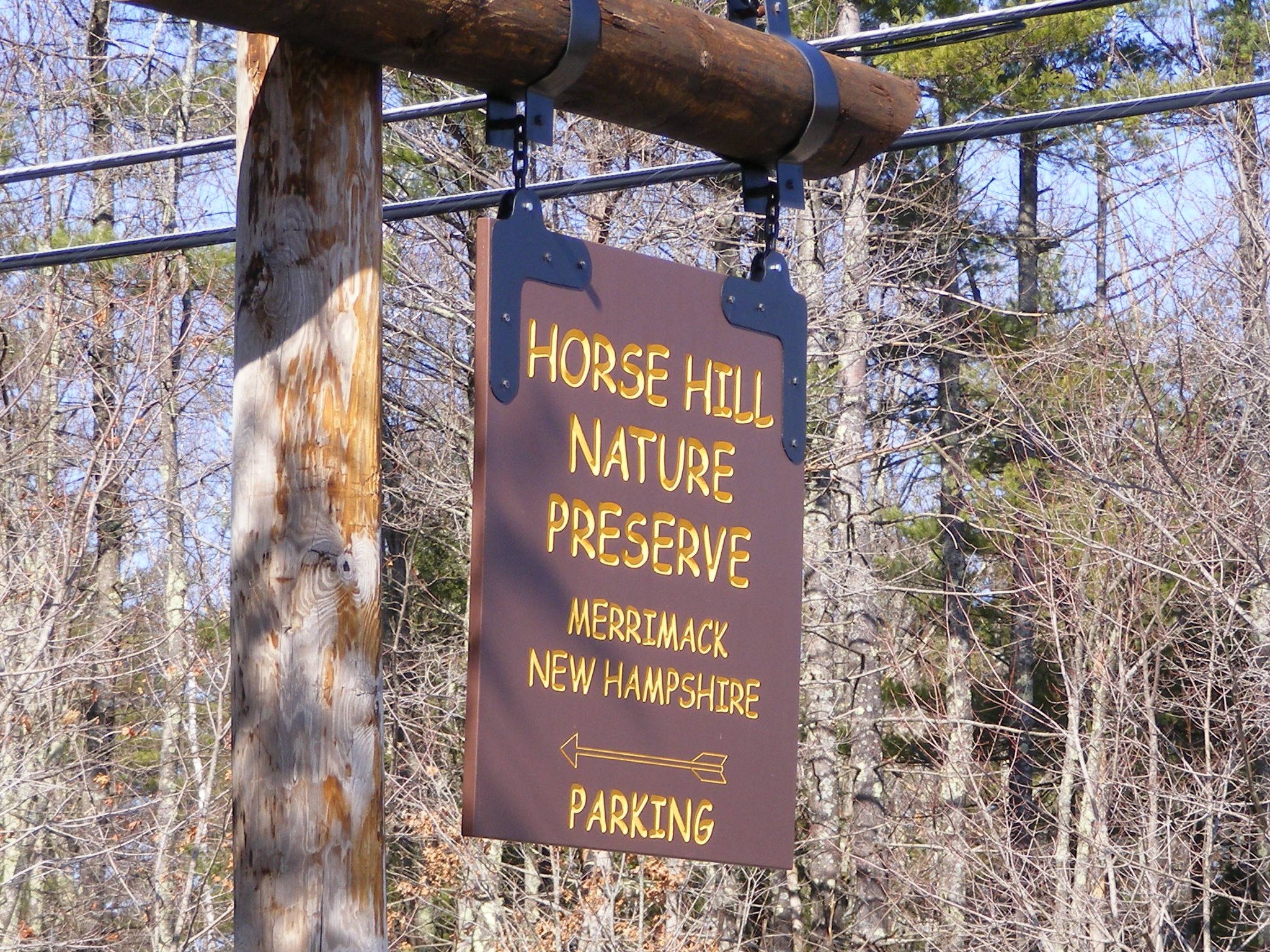 When I moved to this area thirty years ago, what is now the preserve was just a big undeveloped area with a sandpit in the middle. There was once talk of building a housing development in there. The development never materialized, and in 2002, the town purchased the property for conservation. As a community, we made a wise decision.

The area needed a lot of cleanup before it was ready for prime time, and we resorted to some creative maneuvers to get the job done. I remember going there with my son’s Scout troop on a hike. In the sandpit area was debris from the area’s days as an informal target range. Each Scout gleefully stuffed his pockets full of shell casings and carried them out. I can only imagine how many forgotten little brass pieces found their way into washing machines that weekend.

My favorite season at Horse Hill.

Now, Horse Hill is a year-round spot for walkers, runners, and off-road bicyclists. Horseback riding is allowed, too, for equestrians who don’t mind taking their chances sharing a trail with bikes. As for being a nature preserve, Horse Hill’s wetlands and trees provide habitat for a variety of wildlife.

Horse Hill is popular enough that the town just tripled the size of the parking area, yet it never seems crowded once I’m more than five minutes from my car. Plenty of trails branch off from the main loop, so hikers aren’t concentrated in one area.

If you go, download a map first, and then have fun. 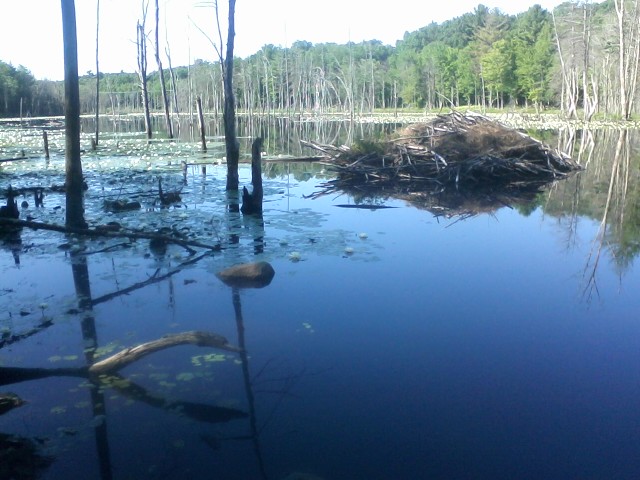 If you peer closely at the photo, you’ll see ice on the this southern New Hampshire trail. I was in Horse Hill Nature Preserve for an hour on the first of March for cryin’ out loud, and this is as close to winter conditions as I could find. A sign at the trailhead warned about muddy conditions, but I had no trouble in regular athletic shoes. Boots would have been overkill. A sweater and thin gloves were my only concessions to the weather.

My snowshoes remain in the basement. I know winter’s far from over, and I may yet this month rave about a beautiful day in fresh powder. That won’t be happening this week, though.

All the local paved trails are clear. Dirt trails have some ice in shady spots. Overnight freezes make for some interesting texture in muddy areas. On a Seacoast trip I took a few days ago, it felt like fall at Odiorne Point in Rye and Peirce Island in Portsmouth.

I haven’t investigated the auto roads up Pack Monadnock and Mt. Kearsarge lately, but I wouldn’t be surprised if they were in good condition for pedestrians with light traction aids. Let me know if you’ve scouted out those paths.

Proud to be a member of the NH Rail Trails Coalition!