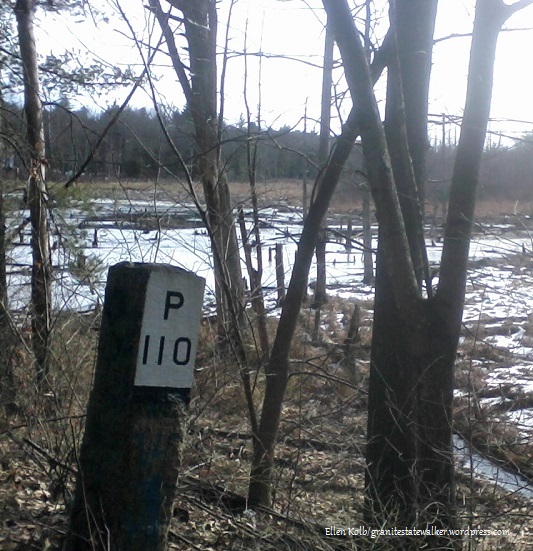 P is for Portland, Maine: northern terminus of what used to be a Boston and Maine rail line, 110 miles from this granite marker along the Nashua River Rail Trail in Massachusetts. The other side of the marker says W37, meaning 37 miles to Worcester. This is one of several markers remaining from the days of the active line.

It’s a fifty-degree February day, with open water alongside the trail. The three-mile stretch of trail I had to myself this weekend is a patchwork of clear pavement and slush and half-melted ice. I came upon a couple of skinny little blown-down trees that were easy to move off the trail. We have yet to see the season’s first serious sustained winds that will surely bring down a big pine or two.

This was a nearly-silent walk, perfect for a Sunday morning after Mass. There’s no hum from the Skydive Pepperell plane in the winter. The noisy geese that usually populate the swamps and ponds along the way were absent. No kids trying out their training wheels, no runners passing me, no backyard barbecues at nearby houses. There will be plenty of time for all that later in the year. For today, solitude suited me.

Proud to be a member of the NH Rail Trails Coalition!