No columbines yet on the Nashua River Rail Trail. I knew today was kind of early in the season, but I was eager for the year’s first visit to this old friend of a trail. I spotted a columbine along the way in the Dunstable stretch about three years ago. The following year, a second plant sprang up a few feet away. Since then, I haven’t been able to spot them – pulled up? died? I don’t know, but I look for them anyway.

Blossoms were few this weekend – a dandelion, and a few of the tiny violets that I refuse to call weeds even when they’re all over my lawn. The deciduous trees along the trail are just beginning to leaf out, and little pines are taking root in the shadow of big ones. The skunk cabbages down in the wetlands are the brightest green in sight. Spring cleanup has already been done by some wonderful group, probably volunteers, who have moved the winter’s deadfall off the pavement. 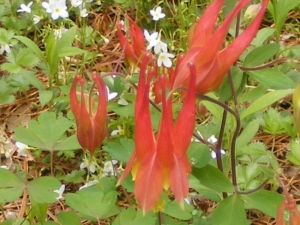 Most flowers are still a few weeks off, and yes, I’m impatient for them. Still, I liked what I saw today – if not for its own sake, then for what it means for the coming season. Clumps of green grasses and ground cover are poking up through the dead leaves along the edge of the trail. The farm in Dunstable has sheets of white row-cover already out on one field, so something’s been planted – will it be pumpkins or butternut squash this year? The soda vending machine that one whimsical family sets up annually in their back yard adjacent to the trail is back, and the price per soda is unchanged at $1.

No plane from Skydive Pepperell. I’m not sure if that was due to the weather or the calendar. From late spring through fall, I’m accustomed to the every-20-minutes rhythm of the Twin Otter as it takes off from its airstrip near the trail, makes lazy circles up to what I’m told is 13,000 feet to let out the skydivers, then descends and returns. 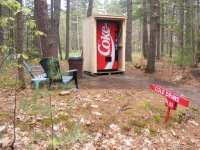 From a good NRRT neighbor: the soda stand

Weekend traffic was far below summer levels. Very few Type A’s, as I call the cyclists that seem to be on a mission, zooming past everyone else, calling out a courteous but abrupt “On your left!” as they fly by. This was a family day, featuring kids on training wheels or on very shiny bikes that were probably under the Christmas tree. One high-spirited six-year-old had a BMX-style helmet that probably cost more than his bike.

No helmet or bike for me this weekend, just sneakers and a hankering for wildflowers. They’re not out yet, but I’ll see them soon.