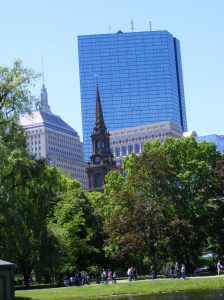 I try to manage my infrequent trips to Boston so as to catch good weather, since so much of the city is a treat for pedestrians  like me. Yesterday was Memorial Day, perfectly clear, with a high temp of around 70. Perhaps ten days a year have conditions so perfect for pounding the pavement as a camera-toting tourist.

“That’s not a trail,” you’re sniffing. My reply: “Is, too.” I haven’t been to every part of the city, but as someone who Will Not Drive In Boston, I assure you it’s an urban walker’s dream.

Yesterday’s trip was inspired by two things. The memory of the atrocity of the bombings at the Boston Marathon last month is still fresh. I wanted to make my own quiet, private statement that no terrorist is going to bomb me into being scared of the city. Prompted in part by gratitude for the overwhelming support for the city expressed by people from everywhere since the bombings, and no doubt partly to say that the city is very much still open to tourism, the Museum of Fine Arts offered three days of free admission over the holiday weekend. That clinched it. I plunked down $22 to Boston Express for a bus ride to South Station.

Ironically, when I got to the Museum, I found a line outside about 200 yards long of people waiting to get in. That’s a great testament to both to the Museum and to the city’s low fear-factor. I wasn’t in town to wait in line, though, so I moved on.

Yesterday was Memorial Day, and Boston honored Massachusetts’ war dead with a simple but moving display of over 30,000 American flags on Boston Common. That’s one flag for each life sacrificed.

The Common is an interesting place at any time. Buskers, tourists with cameras & kids, schoolchildren en masse, and locals going about their business all ply the paths, watched over yesterday by mounted police. The Freedom Trail starts there (unless you consider the start to be in Charlestown, at the other end of the trail). The Massachusetts State House is across the street from one corner of the common. Augustus Saint-Gaudens’ magnificent sculpture of the 54th Massachusetts Regiment  faces the State House. Conveniences on the Common include a playground, food vendors, and the Park Street T station. Squirrels and birds abound, and they’re all little beggars, completely habituated to throngs of people. (That does not mean “tame.”)

The T, on the off chance anyone outside New England sees this, is the city’s nickname for the subway. Boston has a decent mass transit system that includes subways, buses, commuter rail, and water taxis. Driving in the city has no appeal for me whatsoever. Every snarky thing you’ve ever heard about Boston drivers is true. When I visit the city, the T is my close personal friend.

The Public Garden is across the street from the Common on the west side. Here there be the swan boats. I last rode in one of those back in the mid-1960s when my family visited Boston. Yesterday, they were irresistable. For $3, a swan boat ride is one of the city’s great bargains. I guess that means I take a swan boat ride once per century. These are oversized paddle boats, with all the paddling done by one sturdy young person, so the short trip around the pond isn’t marred by the sound of half a dozen internal combustion engines putt-putting through the water.

Boston is full of museums, and I can heartily recommend the Children’s Museum and Museum of Science as well as the Museum of Fine Arts. I visited the MFA last year when the new American art wing opened, and I could easily have spent the whole day there instead of the two hours I had. Yesterday, though, the line outside was too much for me. A walk to the back of the MFA via a promenade on the east side of the building leads to the Fenway (that’s a street, not a building; Fenway Park is actually a few blocks away). Cross a pedestrian bridge to the Back Bay Fens, part of the city’s “Emerald Necklace” of parks. This was my first visit to this spot, and I would have missed it altogether if I had been in the museum instead. 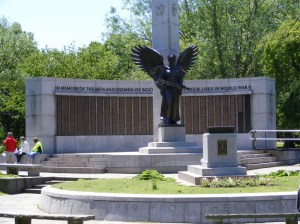 This park includes a war memorial that was getting far less attention on this Memorial Day than the temporary one on the Common. It’s a striking monument to Massachusetts soldiers and sailors who died in World War II, Korea, and Vietnam.

Nearby in the Fens is the Kelleher Rose Garden, a little fenced-in nook that I’d have overlooked if there hadn’t been a sign. An astounding variety of roses is planted here, and they’re a few weeks away from being in what must be glorious bloom. A couple of plants were blooming shyly off to one side. After checking out the roses, I continued on the park path and shortly came to an extensive community garden. Flowers abounded.

Once I found Boylston Street, I walked back toward the Common. The holiday traffic was actually light by Boston standards, but the taxis and their brassy drivers were out in force. (Here’s a tip: if you’re crossing any street in central Boston, do it with a group.) This took me through Back Bay, and on another day I might have stopped at Prudential Center to window-shop wares I can’t afford or visit the Skywalk. My destination was Copley Square, though, flanked by Trinity Church and the central Boston Public Library. 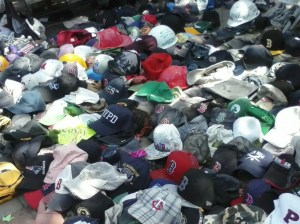 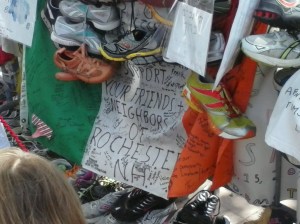 Here, mere blocks from the Marathon bombings, a makeshift memorial to the victims, survivors, and city itself is still growing. Countless handwritten messages of sorrow and encouragement cover children’s drawings, baseball caps, banners, and items of clothing. There’s a large pile of stuffed animals, sent from who knows how many places. The site has become such a popular place for both tourists and area residents to pay respects that volunteers are on site as guides. Donations are accepted there for One Fund Boston, the charity set up by the mayor and governor to support the victims of the bombing.

Nearby, the sites where the bombs went off have been cleaned up and are in the process of reconstruction. I liked seeing that.

From there, I went back to the Park Street T station and thence to South Station. Total walk: about five miles. I could have skipped a few T segments and taken a longer walk. Every Boston trip for me includes a map of the T and advance plotting of a route to whatever place I want to see. Sometimes, though, it’s the things I don’t plan for – like the Back Bay Fens – that make for the best walks.